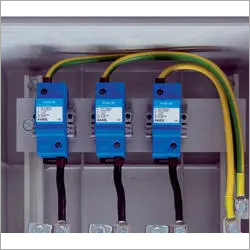 A spark gap is a device which is capable of passing the IEC Class I test consisting of a 10/350 waveform impulse of unrealistically high peak current, charge, and specific energy.

Traditional spark gap devices have been around for many years, and are used as lightning protection by electric utilities for high voltage applications (primary side of the transformer). Traditional spark gaps, sometimes called air gaps, are simply a gap of air separated by two electrodes.

When a high enough voltage (difference in potential) occurs between the two electrodes, the air gap sparks over and creates a short circuit for current to flow. One reason arc gap technology has historically not been used on the secondary side of the transformer is because of the difficulty in extinguishing the arc. The arc, once created by the impulse voltage is sustained as “follow on” current, AC current that flows through the arc plasma. Effectively the arc appears as a short circuit across the AC mains. This results in a short circuit on the system that will trip upstream circuit protection devices therefore limiting the reliability of the system.

More recently LV spark gap arresters have appeared on the market with a number of useful features. The first and most important feature is the construction of arc chutes which allow the arc to extinguish. Other manufacturers have different arrangements to aid in extinguishing the arc.

Spark gap diverter have very high surge ratings and based upon the premise that bigger must be better they should be the answer to all surge protection problems. Unfortunately this is not always the case. Spark gap diverter originated in Germany where the emphasis is on cheap domestic protectors. The largest MOV based protectors typically available from the European manufacturers is 40kA. So something inexpensive was needed which had a high surge rating. The situation in the US and Australia is different. These countries have developed high energy MOV based surge diverter and the use of spark gaps has been almost unknown.

Other Products in 'Powerline SPD' category